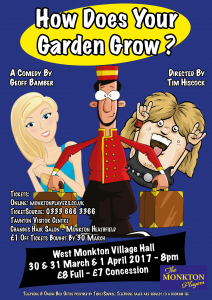 How Does Your Garden Grow?

A Farce By Geoff Bamber

Banker Roger Crompton is hoping to celebrate his fiftieth birthday by consummating an adulterous affair with a colleague. Unfortunately, the hotel he’s picked just happens to be the one his colleague has been threatening to shut down. In true dirty weekend tradition, they are booked in the name of Jones, but of course, they aren’t the only Joneses staying in the hotel – there’s Nathan Pond, an aging rock star, heading for a festival with his agent, but also hiding from a stalker. Mistaken identity abounds, not least when Roger assumes that the local policewoman is really a stripogram.